Nothing seems to stop the upward trajectory that the price of Bitcoin has in the main markets of the world, and especially, in the main economies of the Latin American region.

Venezuela, Argentina and Colombia not only appear on the global board of global adoption of cryptocurrencies, according to the latest Chainalysis report as we reported this week; Rather, the price of Bitcoin against its local fiat currencies continues to strengthen its presence among the millions of users who use the asset as a store of value or medium of exchange.

Let’s review how strong the price of Bitcoin has been in the main countries with the highest crypto adoption in the region, ahead of what promises to be a vibrant weekend in Latin American markets.

With President Fernández hinting at the possible adoption of cryptocurrencies indoors, the price of Bitcoin has been the great benefactor of these types of public statements.

💻 “The discussion about the operation of cryptocurrencies is worldwide and I must confess that it is a matter of care, in my case, for the unknown. But there is no denying it, perhaps it is a good path.” President @alferdez with @juleiva on #Blackbox from @filonewsOK. pic.twitter.com/tRCcnFA3pm

This price assumes an increase of just over six percent in the last seven days.

The New Granada country not only occupies the eleventh box in the global ranking of the “Global Cryptocurrency Index”Of Chainalysis, has also seen how the price of bitcoin grows week by week, even in moments of correction of the asset.

According to the portal Buda.com, the price of bitcoin in Colombian pesos is about $ 180,870,874 COP, a growth of four percent in the last 24 hours, and a weekly accumulated that oscillates at + 3.7%.

The southern nation is not the exception in the region with respect to the strengthening of the price of Bitcoin in Chilean pesos. Now with the entrance of Buda.com to the remittance market, we may see a positive impact on the domestic cryptocurrency market in Chile.

From the exchange, reports indicate that the price of Bitcoin continues to strengthen, growing by more than four percentage points both in the intraday price and in the weekly variation.

Mexico continues to show large purchase volumes on its main exchanges, a sign of the growing adoption of cryptocurrencies in the Aztec nation.

Bitso Exchange shows that The price of Bitcoin in Mexican peso (MXN) continues to strengthen following the same pattern as in the rest of the region. 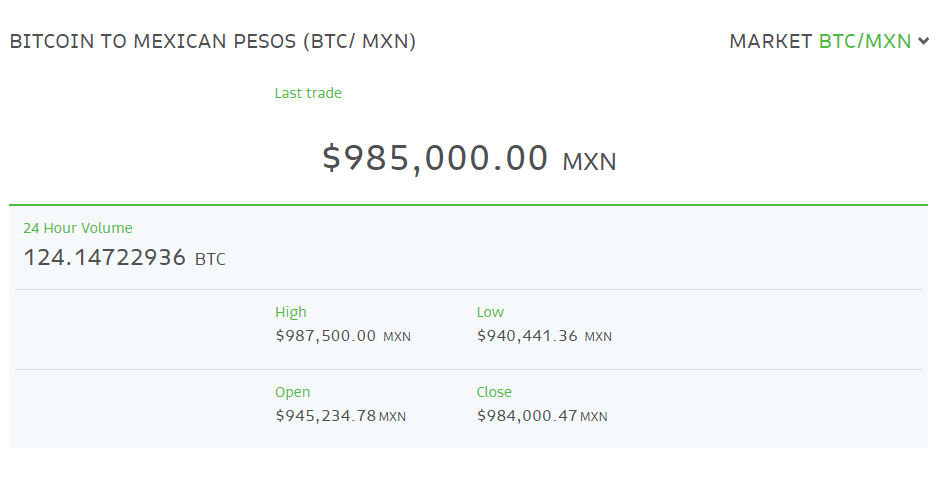 As we can appreciate, the growth of the price of Bitcoin in the last day is + 2.79% compared to the local currency; a weekly accumulated that exceeds seven percentage points.

The Inca nation has had a brief respite in the devaluation of its local currency with respect to the price of Bitcoin in Peruvian soles, after registering highs in the region in the previous weeks.

In the oil nation, Surprisingly, the price of bitcoin has decreased compared to the local currency, the sovereign bolivar.

AriTM, a reference provider in the country for the exchange of cryptocurrencies and digital dollars, shows that the price of Bitcoin in bolivars had a slight correction of -0.91% compared to our last report seven days ago.

Currently, it takes just over 209 billion bolivars to buy 1 BTC, according to AriTM reports.