The price of Bitcoin does not stop giving us surprises and especially in the region of our Latin America, experiencing both bearish and bullish cycles, a strengthening against the main fiat currencies of the main economies of the region.

After its crossing of USD 40,000 this week, the price of the main reference asset in the crypto market, is generating a lot of enthusiasm among the bulls and its performance has not stopped being less in the Latin American market. Let’s review how the price of BTC behaves in the region.

In the south of the American continent, the price of Bitcoin follows an upward movement with respect to the local currency of Argentina, gaining a + 3.99% in the last 24 hours at the time of writing this post.

According to data from Ripio Exchange, the price of Bitcoin for the purchase is about $ 7,767,164.13 Argentine Pesos.

In the coffee country, the takeoff of the market leading cryptocurrency has been sensational in the last seven days, with a gain of + 6.3% according to the data that comes to us from Buda.com.

In the last 24 hours, it takes just over $ 156 million Colombian pesos (COP) to acquire a unit of BTC.

Chileans are also enjoying the honeys of Bitcoin’s success relative to its local currency, the Chilean peso (CLP). According to data from Buda.com, in the last seven days the performance of Bitcoin has been on the rise, with a notable + 8.1%.

As if that were not enough, that accumulated profit has been reflected with the good moment that the cryptocurrency has in international markets after breaking the 40k level, accumulating a + 4.8% growth in the last 24 hours.

The Aztec nation has not been the exception and with high growth in adoption of Bitcoin, In Mexico, the reports from Bitso Exchange show an intraday growth of the + 6.5%, generating a profit of 52,000 MXN compared to yesterday’s closing price. 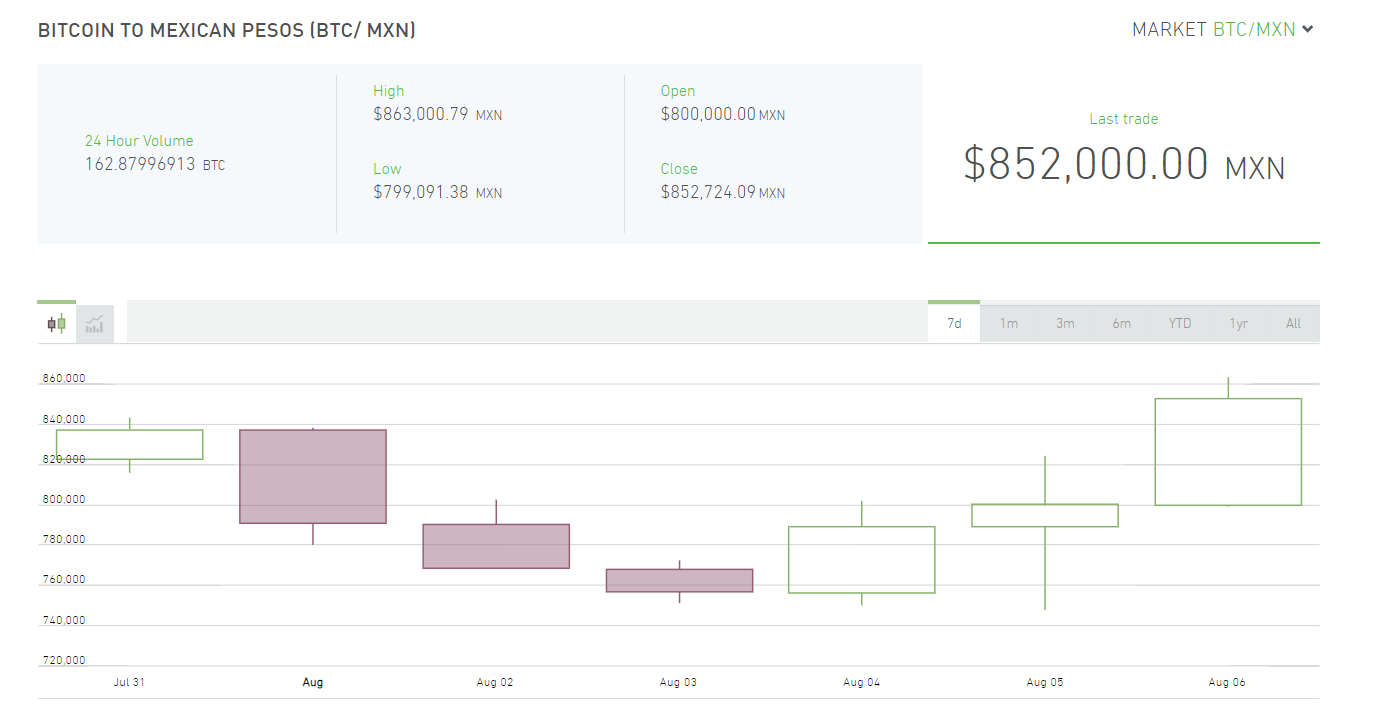 The graph of the BTC / MXN pair is more than eloquent: Bitcoin has managed to overcome its levels registered at the beginning of the week, after breaking the resistance of 840,000 MXN. As a result, at the time of writing the price of BTC in local currency already exceeds 850,000 MXN.

With the entry of socialism in the Inca nation, the local currency of Peru (PEN) has not been entirely favored with this political change of ideological current. If to that we add the strengthening of the price of Bitcoin in international markets, It is logical to observe the great growth of assets against the Peruvian Sun in the last seven days, a + 9.7%.

With the fears of a story similar to the one that occurred in Venezuela due to the delicate political situation that the newly elected president Castillo is going through, the Peruvian Sol has weakened compared to Bitcoin in the last 24 hours a year. + 6.8%.

This change is consistent with the poor performance that the PEN had today against its USD pair, which lost almost one percentage point at the close.

To close with a flourish, the sentenced sovereign bolivar could not stop being news in this incipient market of cryptocurrencies. After becoming aware of the new devaluation by the socialist regime in the South American nation (which has added 14 figures since 2008), the local currency continues to be the worst option for residents of the country as a refuge of value.

By contrast, The price of Bitcoin continues to strengthen against the bolivar (VES), to trade at the difficult figure of about 206,838,090,000.00 VES per BTC, according to data reflected by AirTm.

The views, thoughts and opinions expressed here are solely those of the Author and do not necessarily reflect or represent the views and opinions of Cointelegraph.