The future of the right to abortion in the United States is at stake on Wednesday in a Supreme Court deeply reworked by Donald Trump, who could take advantage of the examination of a law in Mississippi and throw with the country almost 50 years ago, reports AFP . 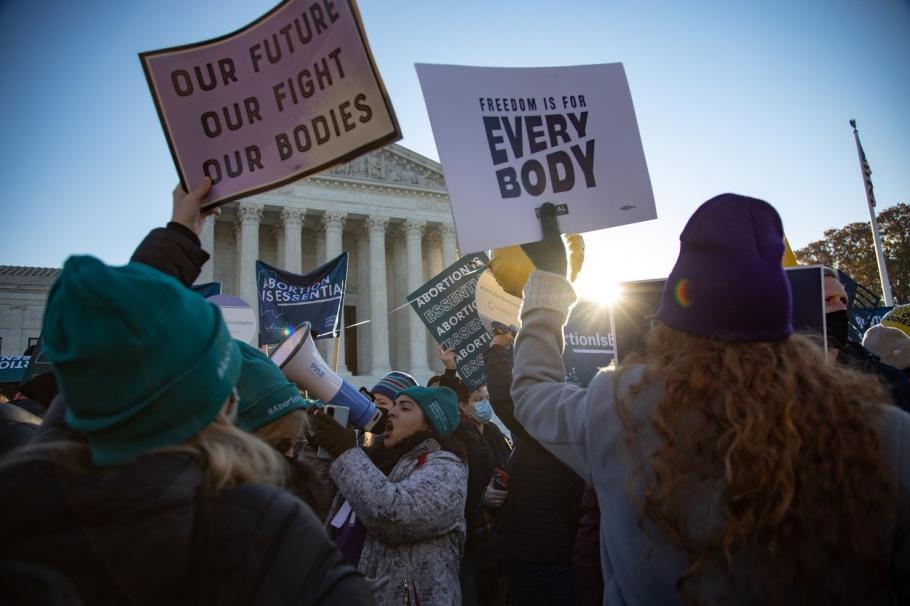 Protest before the US Supreme Court, December 1, 2021

The nine “wise men”, six of whom are conservatives, will analyze, starting at 10.00 local time (17.00, Romanian time), a law adopted in 2016 by this southern state, which prohibits abortions after 15 weeks of pregnancy. The court is due to present its ruling in the spring of 2022. The law, compared to other laws passed in recent years, violates the legal framework established by the Supreme Court. By accepting its examination, the Court signaled its readiness to reconsider its position. This position dates back to 1973, by the emblematic decision Roe v. Wade, by which the Court established that the American Constitution guarantees the right of women to abort and that states cannot deprive them of this right.

In 1992, the Court stated that this was true as long as the fetus was not “viable”, ie until the 22nd or 24th week of pregnancy. Taking note of this jurisprudence, federal courts blocked the Mississippi law before it came into force. Officials from this rural and religious state then addressed the Supreme Court. When accepting their appeal, despite the fact that it was not obliged to do so, the Court announced that it was prepared to question the limit of “viability”. But Mississippi is now asking him to move on and simply overturn his 1973 ruling. “We are aware of the impact of our demand”, Mississippi Attorney General Lynn Fitch points out in an editorial in the Washington Post (WP). “But 49 years ago, the Court favored political intuition over sound legal reasoning in order to reach an unfounded constitutional conclusion, and it is time to correct that mistake.”, she appreciates.

The pro-life position, supported by the Republican Party and the Catholic Church

All echelons of the Republican Party support it, but also the Catholic Church and numerous anti-abortion associations, some of which spent millions of dollars on advertising campaigns before this hearing. All these actors believe that their time has come, after half a century of judicial and political struggle. “We are about to enter a new era, in which the Supreme Court will send Roe v. Wade to the corners of history, from which it should never have emerged.”, appreciated the day before the hearing former vice president Mike Pence, a Christian ultraconservative.

Opponents of abortion are galvanized by the installation in the Supreme Court of three judges appointed by former Republican President Donald Trump, who have strengthened the conservative majority. Their influence was already felt on September 1, when the “temple” of American law refused, for procedural reasons, to block the entry into force of a law in Texas that prohibits abortion in the sixth week of pregnancy. She reopened the case and expressed skepticism about the architecture of the text, but the decision is long overdue, and many Texan women are forced to leave the state to have an abortion.

The right to abortion, defended by Democrats, medical associations and public figures

On the other hand, defenders of women’s right to abortion, “thicker than ever,” are gathering their ranks. Medical, feminist or civil rights groups have written to the Supreme Court asking them to invalidate the Mississippi law, as well as hundreds of elected Democrats or 500 high-level athletes, including footballer Megan Rapinoe. Everyone assures that an alteration, no matter how small, of the current jurisprudence, will bring down the whole edifice.

If the “viability” criterion is abandoned, “states will be able to ban abortions at any stage of pregnancy,” said Julie Rikelman, who will plead with the nine “sages” on behalf of the only abortion clinic in Mississippi.

According to the powerful family planning organization, Planned Parenthood, 28 states will not hesitate to do so, and 36 million women of childbearing age will be deprived of access to abortion. Even without saying this explicitly, a validation of the Mississippi law “would mean a cancellation of Roe”, warns Julie Rikelman, according to news.ro.

The day he changed the lyrics of his song for Pique: VIDEO

a scar, tattoos, that rooster at Eurovision and Justin Bieber