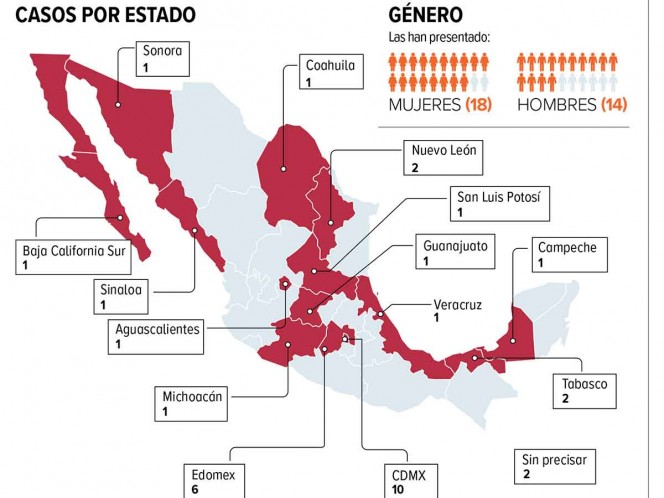 Growing discrimination by COVID-19; CDMX, leads in number of complaints

The extent of the pandemic COVID-19 in the country has led to increased cases of discrimination, to the degree that workers report having been dismissed by the single fact of sneezing, or by having family members infected.

From the past march 19 to date, the National Council to Prevent and Eradicate Discrimination (Conapred) serves 32 cases of people who have experienced discrimination or bullying during the contingency.

Mostly it is workers who, despite being in the risk groups for the disease, they are not allowed to work from home.

The agency reported also cases of health workers, as well as patients with COVID-19, who have been attacked by public servants, companies, or neighbors.

On the topic, the Secretariat of Health, the IMSS and the ISSSTE emphasized that threaten the integrity of the medical and nursing staff affects the response capacity of health emergency.

Discriminate against 32 per coronavirus

Have laid off people by sneezing or are forced to work even when they are at risk.

Sneeze at work and be fired; limit situation, shows the discrimination between mexicans during the current contingency for the new virus COVID-19. This is one of the 32 complaints that it has received the National Council to Prevent Discrimination (Conapred) from march 19 to the date.

“Look at you, sometimes the extremes in social conduct that leads to fear by the COVID-19: we have the case of a woman who was fired from a private company for having sneezed,” revealed surprised Excélsior Cesar Flores Mancillas, deputy director-general of Complaints of the Conapred. “It’s a complaint that came to us recently and of course we are going to attend to.”

Another case, that of a man who had not renewed his contract because he had contact with a sick family member of COVID-19.

Discrimination is another of the virus that you will have to face in the middle of the pandemic coronavirus. Fear, misinformation and ignorance of its major triggers are.

“The workers have until now been the main victims. Working people who are still forcing to go to work; in some cases when you are in a situation of risk, that is to say, when presented a box of diabetes, hypertension, or other paintings,” he warned Flowers.

According to the most recent report by the Conapred, they have filed 14 complaints for feeling discriminated against. We are still working people of medical units with five complaints and after-beneficiaries of social security institutions with four cases. There are also complaints of nursing staff, cleaning, condos, patients with HIV and clients of bank.

Name-calling, teasing, threats, or abuse is the complaint that more repeats; builds up nine complaints. The obligation of going to work six; to do so being in a situation of risk, the other six; the harassment of labour, four; the failure of containment measures and healthy distance, three; harassment by neighbours, two and firing two more, among others.

“This is something new; we had no history of similar complaints and what we serve compared to the magnitude of the problem, we are also living for the first time acts of discrimination against health-care staff and that is also affecting workers, to which it has made the necessary adjustment to be able to work at home, do not live or in 2009 with the influenza,” she said.

Public servants of federal institutions of social security are the most important for discrimination in this crisis. While in the case of the particular companies are the most discriminated against, followed by inhabitants of residential condominiums, social assistance centres, banks, medical offices and schools.

“Depending on the seriousness of the matter we can dictate provisional measures. The bulk of these complaints have been addressed making representations to those responsible, we’ve sent letters rogatory, for example, administrations of condominiums, also to other institutions,” he said.

With the following personal characteristics:

Against acts attributable to: