For investors, November ended up being a month to be forgotten, as strong losses were recorded. What experts expect for December

The stock market closed November on negative, to the rhythm of the political definition that occurred in the month by the legislative elections, the negotiations with the Monetary Fund and the global volatility due to the resurgence of the new strain of coronavirus.

A national and external combo that caused the papers listed on the Buenos Aires Stock Exchange to end the month with accumulated losses of up to 19%.

Something that was also reflected in the Argentine assets that are listed in New York, with setbacks in their prices of up to 24%.

Beyond the main Buenos Aires stock index, the Merval, rose 0.3% on Tuesday, closed in all of November in negative, with a decline in said period of 5.1%, to settle at 79,315 points.

Equally, throughout 2021, continues with a positive balance, by dragging a rise of 54.8% in the year.

In summary, November cut the bullish streak that the market was having in the previous months, and the causes of the collapse registered in the month, according to the analysts consulted by iProfesional, are varied.

“In the month there was a sharp fall in the Merval and a sustained rise in cash with liquidation. One of the causes of this is due to the pre-election bets that took place, since some investors thought that not only the difference between the opposition and the ruling party, but to expand. So the collapse of the market responds to that “, details the economist Gustavo Neffa, Research For Traders (RfT) analyst.

Another cause that is mentioned of this “month to forget” was the departure of capital from emerging countries due to the global increase in restrictions due to the reappearance of the pandemic in Europe and other areas of the planet, and the uncertainty that this brings to the world economy.

The third factor that is added, has to do with the domestic expectations towards the strategy that the Government will take to reach an agreement with the International Monetary Fund.

In particular, the steps prior to this, which have to do with the delivery by the Minister of Economy, Martin Guzman, of the annual goals in Congressor, as if to lay the foundations that there will actually be an agreement with the IMF.

“All this is going very slowly and to this is added the letter from Cristina Fernández, which does not allow an attempt to settle with the IMF, and the vice president detaches herself from that. So it makes clear the internal that exists within the government coalition between the different fractions, something that leaves the institutional scenario very weak, “completes Neffa. Beyond the fall in shares, it was also registered in the month a drop in bonds of up to 18% in dollars, as was the case of the debt title as of 2030 (AL30).

“The collapse of the bonds after the circulars of the central bank and the resolutions of the CNV that took a floor from the price. A BCRA that, despite everything, sold almost $ 900 million. In other words, the market did not care that Peronism lost the Senate for the first time since 1983, or that it was on par in deputies. Nor did it buy the loss of power of Cristina versus the governors and mayors. For that reason, November deepened the course “, sentence Mauro Mazza, portfolio manager of Bull Market. 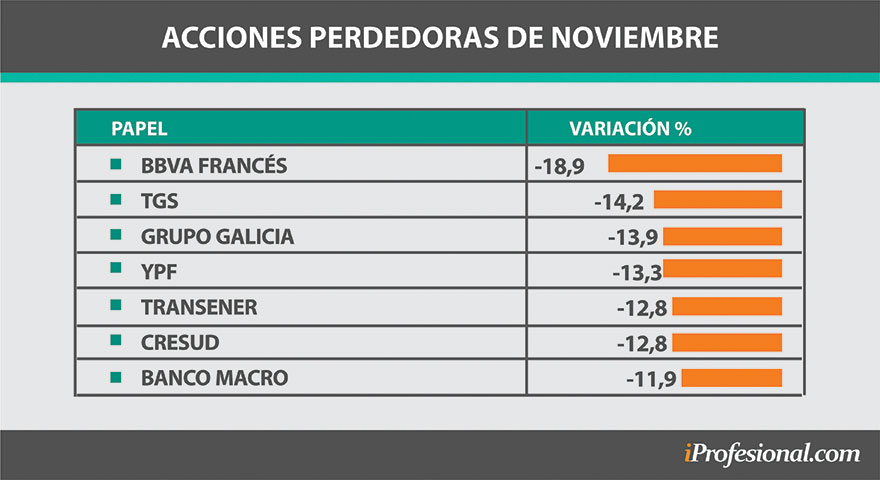 In November, shares accumulated price drops of up to 19%.

The fall of the Merval in all of November of 5.1%, shows that the general reflection of the month was to be forgotten.

The main declines in leading stocks were led by BBVA French, that fell in that period 18.9%.

“It was a black month, where the banking sector was the biggest loser, then services were located and, finally, the oil sector,” Mazza analyzes.

And complete: “The worst hit, which were the banks, presented mediocre balance sheets, with the exception of Macro and Galicia. The latter had a strong exposure to the public sector, and Macro recorded good efficiency numbers but the Argentine risk. ”

In this sense, Carlos Olivieri, Financial advisor and professor of capital markets at Di Tella University, tells iProfesional: “Argentina falls 10% in dollars. The fall was led by banks, which decreased their values ​​by 25%, as a result of punishments produced by the resolutions of the Central Bank and by the same sector, which despite being solvent and liquid, is more at the mercy of the government’s financial weakness. ”

Meanwhile, he details that the oil sector also sees “with concern” the lack of support for a hydrocarbon law, which “sets clear investment rules.” Added to this is the international drop in the price of crude oil.

The companies that were “saved” of the generalized coup and that registered very high increases in the month were the shares of Aluar (17.5%) and Byma (16.9%).

On Wall Street Argentine shares (ADR) also traded, for the most part, in red in the balance of all November.

The biggest falls of the month, in the national papers listed in New York, were those of Transportadora de Gas del Sur (TGS), that decreased 23.7% in the month. 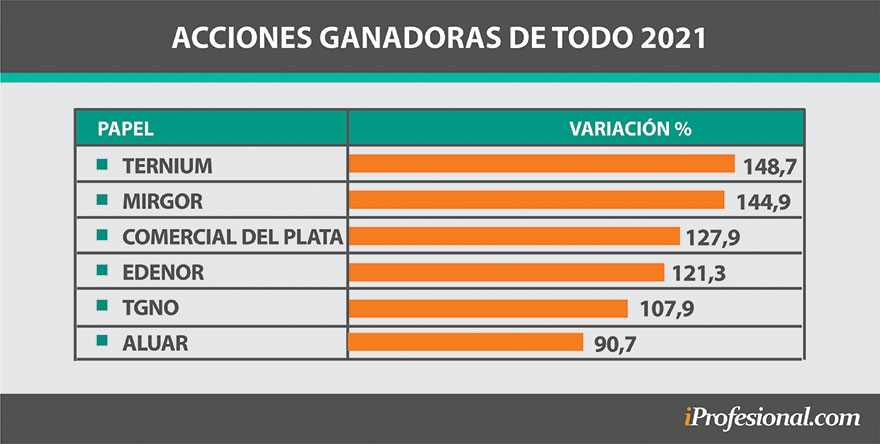 Throughout 2021, several stocks register interesting rises in their prices, which reach a maximum of up to 149%.

Balance of a volatile year

When it comes to analyzing all yearDespite the stumble in November, the Merval posted very interesting gains. In fact, this main stock index rises 54.8%.

That is to say, by far they beat inflation and the devaluation of the currency, which reaches up to 53% throughout the year in the free cash market with liquidation.What to expect

Regarding the prospects for what the last month of the year may hold, and the first part of 2022, the analysts consulted by iProfesional prefer caution.

“Uncertainty reigns in the local market in the face of a complex scenario towards the end of 2021. The falls that we are seeing at the end of the current month, in all Argentine assets at a general level, are explained as a consequence of the lack of certainty regarding the future of the local economy “, sentence to this media Nicolas Lo Valvo, investment analyst at Balanz Capital.

And he adds: “In the meantime, it is still expected that positions will be confirmed in the negotiation of the debt with the IMF. Bookings of the Central Bank are committed, even more so if we take into account the maturities that the Government must honor next year. ”

In this regard, the reflection of this situation is the country risk, which does not stop breaking new records since last year’s debt swap. Even on Tuesday it reached 1,905 points, which implies a cumulative rise of almost 12% in what happened in November.

Therefore, in the coming months, “The eyes of investors will be positioned in the face of the economic plan to be communicated by the Government, where the renegotiation of debt with the IMF will be contemplated”, Lo Valvo ends.

For its part, it should also be analyzed in international context, which can hit emerging countries even more.

In this sense, Olivieri maintains that December begins in USA, again, “with great nervousness, due to the fact that the Vix (volatility) index is shown at high levels, showing that it will not be easy to see an early recovery of the stock market values ​​”.

And he limits: “Here, in Argentina, positive news missing to encourage new investments beyond the dollar, although the rebound in consumption may reverse this trend in mid-December. ”

Therefore, he maintains that whoever invests with this level of the market in dollars has “very high probabilities of having profits in the short term.” Thus, it recommends several companies such as Ternium, TGS, Pampas and Clarion, because “they should support higher stock market values ​​in the short term.” 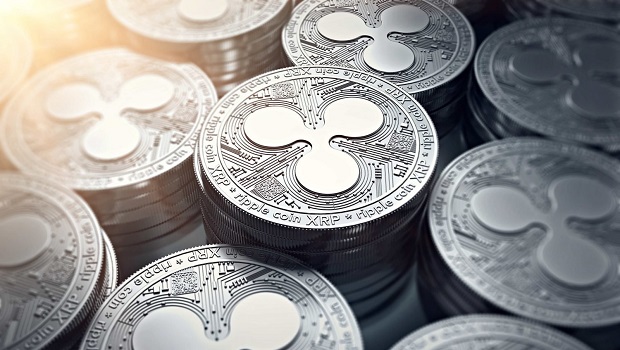 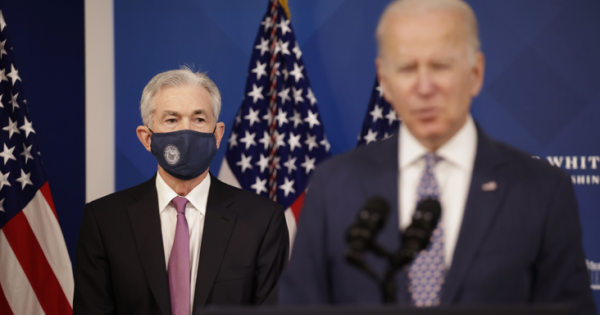 Biden nominates Jerome Powell for another four years at the helm of the Fed: the reaction of the markets 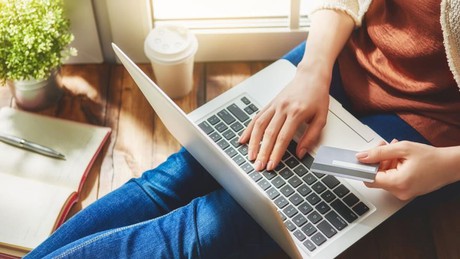 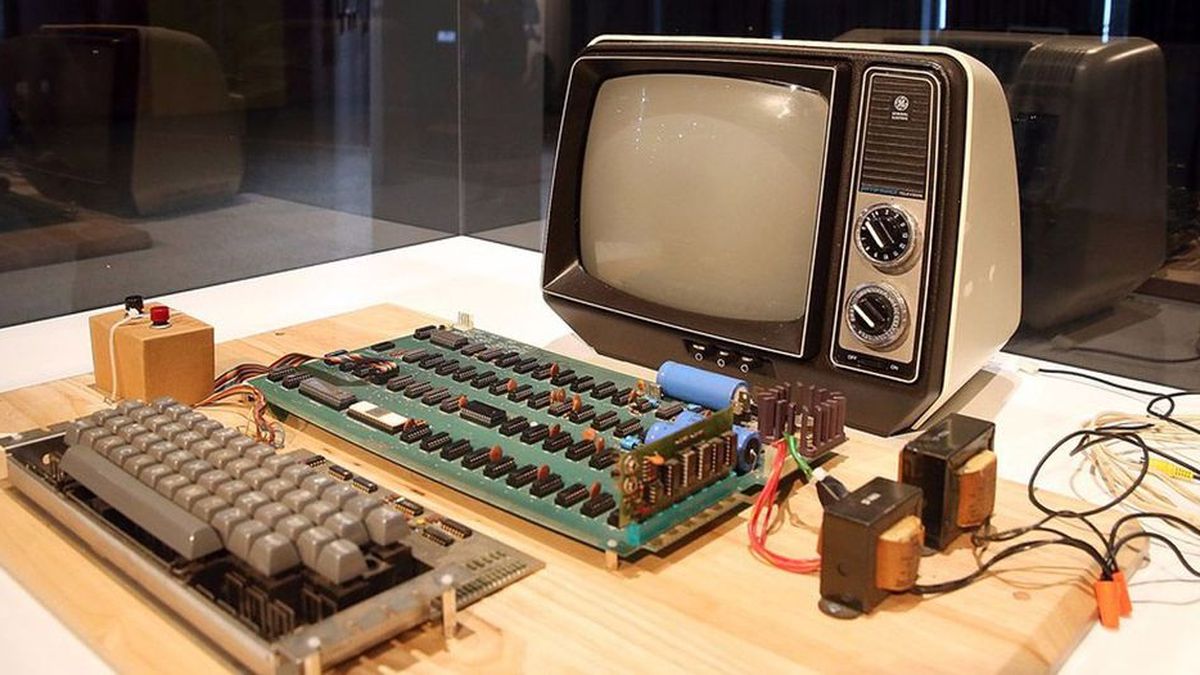