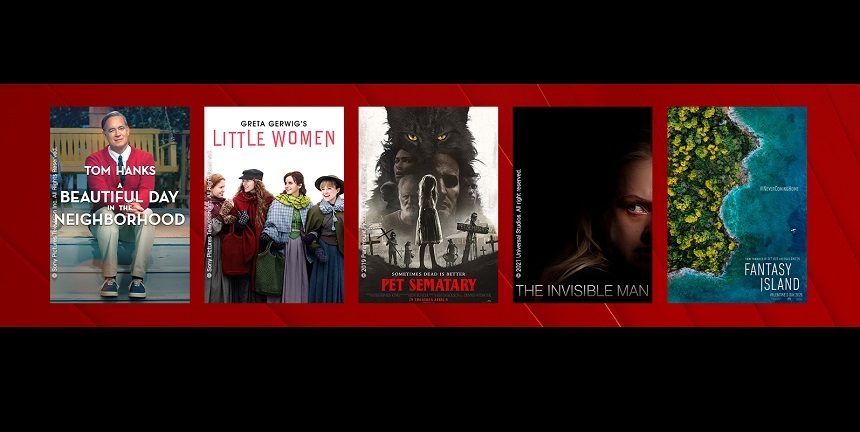 “A Beautiful Day in the Neighborhood” will be broadcast on October 16, from 20:00.

Journalist Lloyd Vogel is due to write an article about Fred Rogers (Tom Hanks), the producer and presenter of a children’s TV show. Initially, he is skeptical, as it is difficult for him to admit that there are really people as good and empathetic as Mr. Rogers, but the TV presenter’s features manage to turn the reporter into a moral plan, who will feel ready to reconcile with own painful past.

As they grow and become women, the March sisters go through both problems and beautiful moments. They will try to shape their lives and their future despite all the social norms of the time. The screenplay based on the classic novel by the writer Louisa May Alcott shows the life of an alter ego of the author, and the beloved story of the four sisters determined to live their lives according to their own criteria remains valid in any era.


Louis Creed and his wife, Rachel, and their two children, Gage and Ellie, move to a quiet town, to a house next to an animal cemetery. After the family cat dies in an accident, Louis decides to bury the animal in the mysterious cemetery nearby. But the place is not what it seems, and the Creed family will suffer as a result of this decision.

Cecilia (Elizabeth Moss) manages to free herself from the abusive relationship in which she is caught, and her ex-boyfriend, a rich scientist and obsessed with control, commits suicide and leaves her part of the fortune. But when she begins to face increasingly sinister and dangerous situations for her loved ones, Cecilia suspects that his death is just a scam. Because it is impossible for her to prove to others that she is being harassed by a being who cannot be seen, and the police refuse to take her story seriously, the woman decides to take control of her life, retaliating on her own.

On the island of fantasies, in a luxury tropical resort, the enigmatic Mr. Roarke turns into reality the most hidden dreams of his guests. Some dream of revenge, others of impossible reunions or different choices, but soon enough, fantasies turn into nightmares, and guests must unravel the mystery of the island in an attempt to save their own lives.


Share
Facebook
Twitter
Pinterest
WhatsApp
Previous articleHarrison Ford landed in Sicily for filming the new Indiana Jones
Next articleBritney Spears’ mother pleads for the artist to escape her father’s guardianship: “She’s been able to take care of her for years”

Angelina Jolie, radiant at the premiere of “Eternals” in Rome