The General Health Council, headed by president Andrés Manuel López Obrador, declared yesterday to Mexico in a public health emergency by reason of force majeure for the accelerated advance of the pandemic of the coronavirus that causes the covid-19, by which it decided to extend until April 30 suspension of non-essential activities in the public, private and social, in addition to censuses and surveys.

Separately, through their social networks, the Public Education secretary Esteban Moctezuma, announced that it will extend the suspension of school activities of more than 25 million children up to the 30 April.

In National Palace, the Foreign secretary, Marcelo Ebrard, said that the seven measures of mandatory proposals by the Board of Health have a target of “reducing the burden of disease, its complications, and death by covid-19 in the population resident in the national territory”, which yesterday surpassed the barrier of thousand cases.

Ebrard made clear that those companies of the private initiative that decide not to sympathize with the national emergency, and to guarantee the employment, one month’s salary and the affiliation to the Mexican Social Security Institute, shall be liable to an administrative penalty, the closure of establishments and even demands criminal to put at risk workers.

Are considered as essential activities of the branch medical, paramedical, administrative and support across the health sector, public and private, involved in public safety and citizen protection; the defence of the integrity and national sovereignty; the administration and enforcement of justice, as well as the legislative activity at the federal and state levels.

“In all the sectors and activities defined as essential, have to be applied on a mandatory basis the following: not to conduct meetings or congregations of more than 50 people, frequent hand washing, sneezing or coughing by applying the respiratory etiquette, greeting at a distance (no hello kiss, or hand, or hug) and all other measures of a healthy distance in force and issued by the Secretariat of Health federal,” he said. 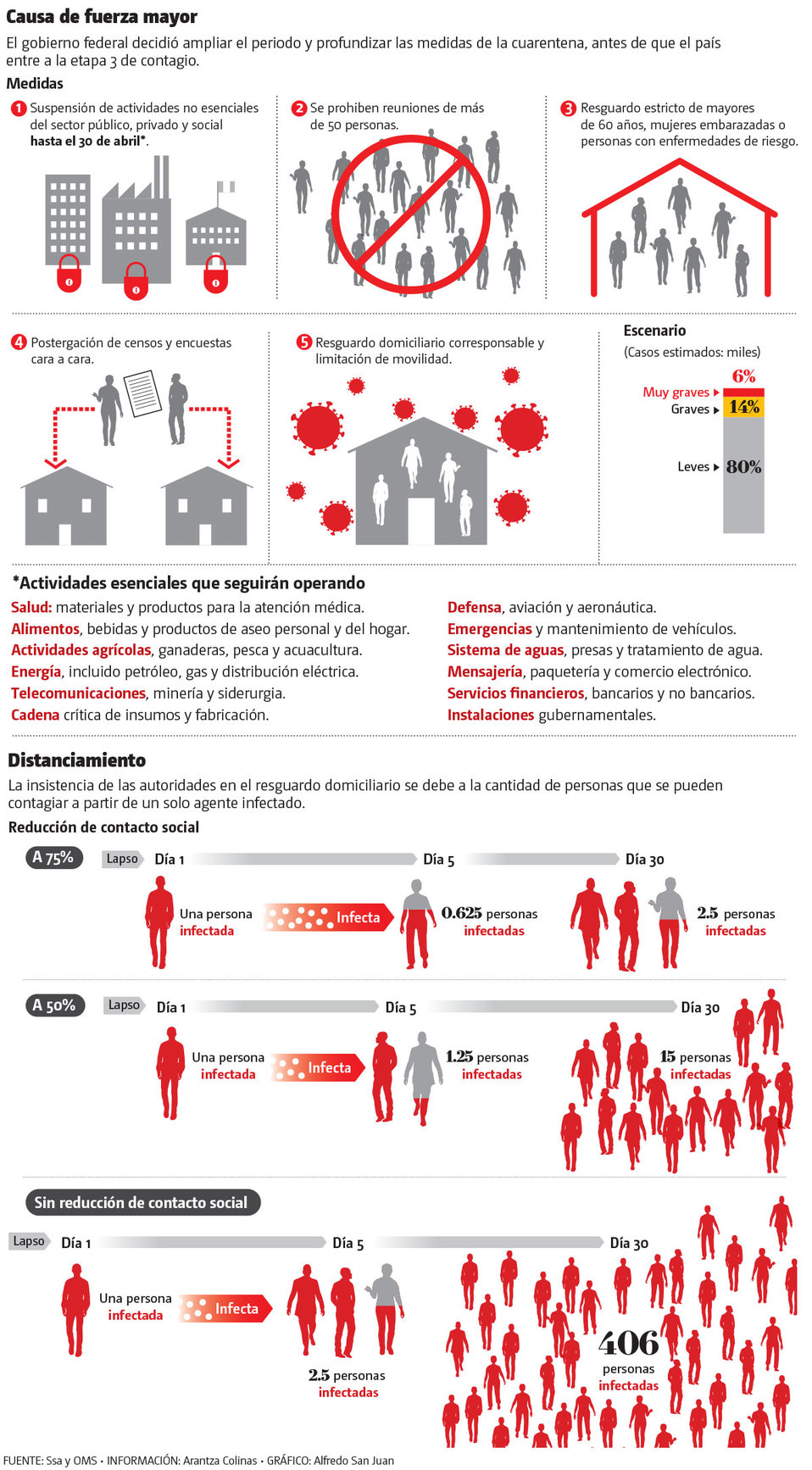 The chancellor stressed that does not impose a state of siege and that the population will be respected in their human rights. For this reason, he urged the citizens to remain at home, as that applies to the entire population resident in the mexican territory, including the one that arrives from abroad, and which does not participate in work activities essential to meet shelter home co-head of the 30 of march to 30 of April.

“The guard house is applied strictly to every person over age 60 or with a diagnosis of high blood pressure, diabetes, heart or lung disease, immunosuppression (acquired or arising), in a state of pregnancy or immediate postpartum period, regardless of whether their work activity is considered essential,” he said.

The decree, published today in the Official Journal of the Federation and that comes into effect, points out that the key staff of public interest may, “on a voluntary basis, come to work”, in addition, a long-term suspension of non-essential activities and the shelter house steward, “the ministry of Health, in agreement with the ministry of Economy and the ministry of Labour, issued guidelines for a phased return and regionalized to the work activities, economic and social of the entire population in Mexico.”

In the act of declaration were present the secretaries of Health, Jorge Alcocer Varela; Marina, José Rafael Ojeda Duran; of National Defense, Luis Cresencio Sandoval Gonzalez, and Olga Sánchez Cordero, the Secretary of the Interior.

The agreement provides that the Secretary of the Interior shall maintain communication with the powers of the Union and with the governments of the federal states; the secretariats of Finance and Public Credit, Economy, Employment, IMSS, Issste, and Infonavit, operate the necessary measures in order to protect businesses and workers during the term of the declaration.

On the need to acquire a new medicine, and equipment, was established: “To the secretariats of Finance and Public Credit, Economy, Health, Public service, IMSS, Insabi, Issste, (touch) to solve the needs of human resources, equipment, medical devices, and medicines that are necessary to ensure the timely care and sufficient to those who require medical attention depending on the pandemic of covid-19″. 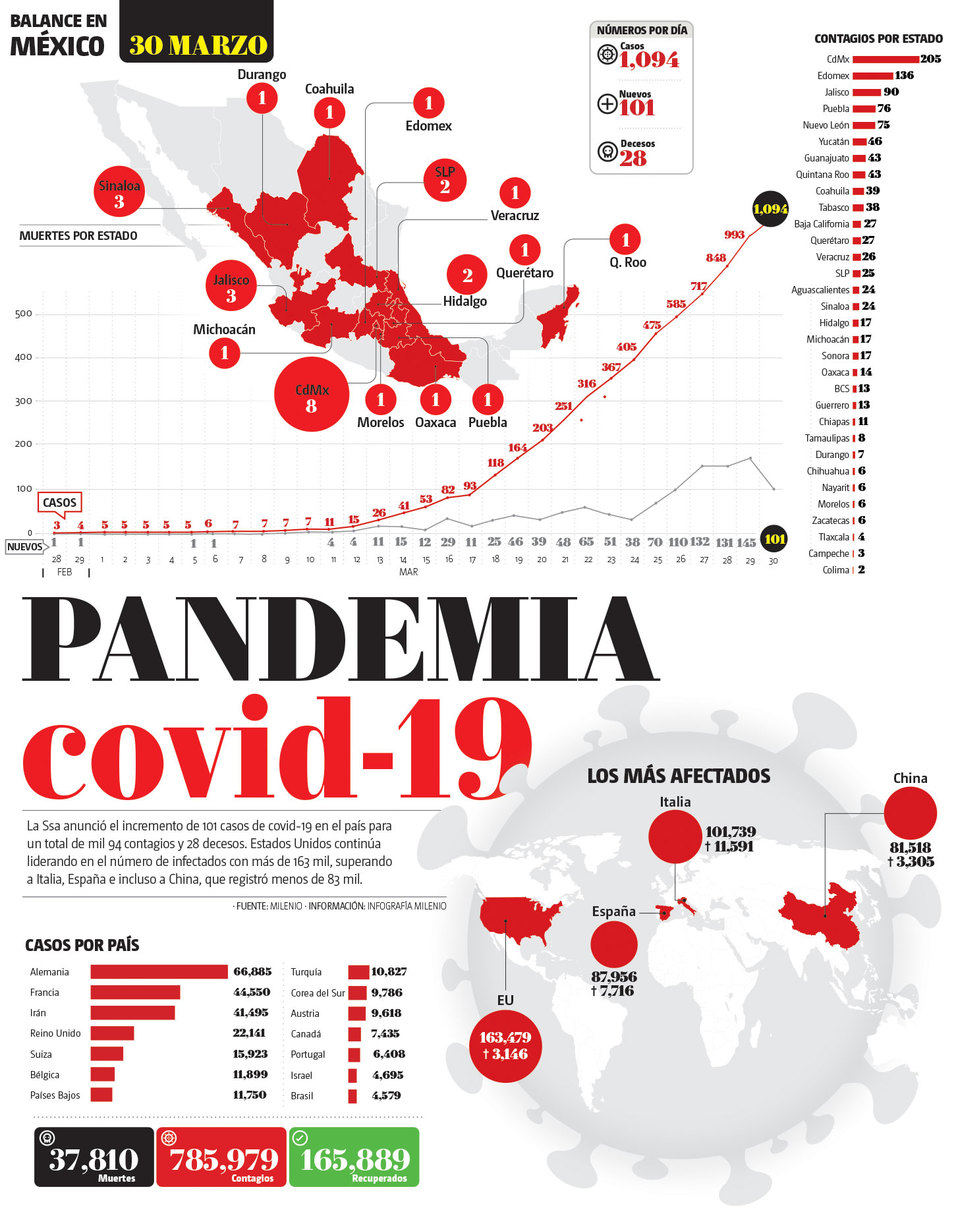 CdMx is in addition to the federal plan

• The head of Government, Claudia Sheinbaum, was reported in their social networks that this emergency is translated “in the immediate suspension in the capital of the whole activity is not essential in all sectors”. Isabela Rosales, president of the board of Directors, instructed the closure of the buildings that make up the Congress of the City of Mexico, in 24 hours, and for an indefinite time, to combat the spread of covid-19.