the lottery that costs 1 dollar and gives you 50 thousand

It is a “savings” lottery that allows you to maintain your investment and seek profitability through a raffle. The keys to the mechanism

In times of crisis, Argentines do not hesitate to run towards the dollar. Although that path is no longer flat and more and more hurdles are added to it: the monthly cap of US $ 200, the inability to access the “PayPal Dollar” and now the transfer limit.

But nevertheless, Creole ingenuity scrambled to reach the goal and found in the world of virtual currencies a key ally to safeguard their savings with a view to the post-pandemic and the negotiation of the debt, which they threaten with an honesty of the American banknote. 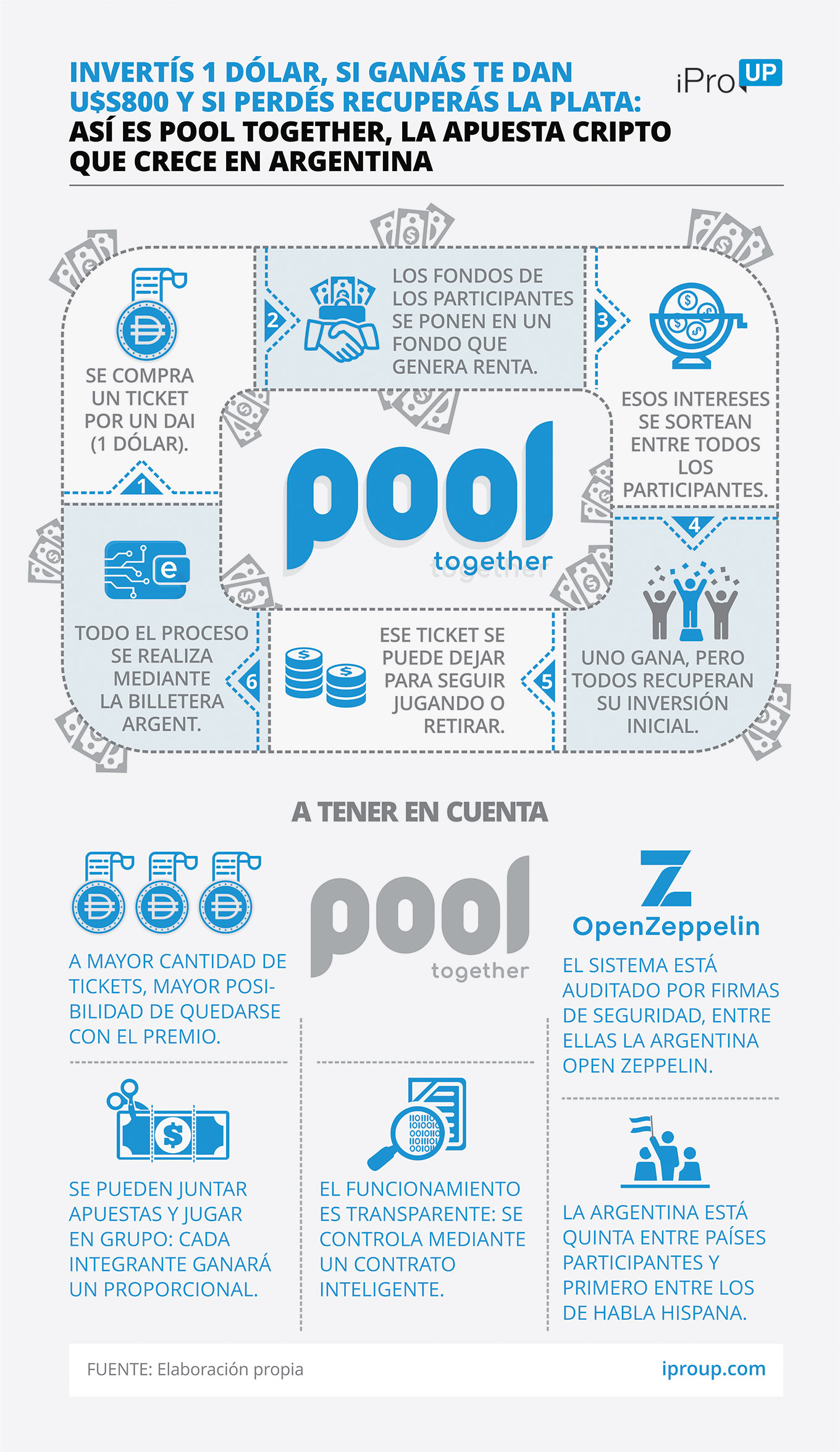 To this must be added the commitment to DAI, stablecoin or stablecoinas it maintains its constant value and tied to another asset in the real economy: in this case, the us currency, for which it is called “digital dollar”.

But Argentines don’t just buy and sell: they are also venturing into the world of decentralized finance (DeFi), taking advantage of different investment alternatives.

In games of chance, only one wins and the rest lose money. But the digital universe created a modality in which one wins but the rest keep what they invested. Is about Pool Together, self-defined as a “savings” or “no-loss” lottery.

“You buy some tickets and from there you participate in a raffle for a prize. If you don’t win, you get your funds back“, he assures iProUP the Argentine Nahuel Burbach, Community Lead of Pool Together for Latin America.

How is it possible? According to the manager, the concept is easy to understand: “All the money is taken and placed in a protocol that returns interest, under a smart contract. Every week it generates interest, which is raffled on Fridays among all the participants “.

A DAI will always cost a dollar, so it is a good way to save on crypto without the fluctuations of Bitcoin.

– The minimum bet is a ticket worth one DAI (one dollar)

A smart contract based on ethereum network he is in charge of raffle the prize and transfer the funds To the winner. To ensure transparency, all development is open source and audited by two companies, including Argentina OpenZeppelin, a startup of the Endeavor network that is among the candidates to be the sixth unicorn local.

Furthermore, as it is a decentralized project, no need to register with personal data. You will only have to have some of the coins (they can be purchased at SatoshiTango, Binance, BuenBit, Bitso and other exchanges) and transfer those funds to a non-custodial wallet, such as MetaMask, Coinomi, Trust, Status, and so on.

According to the executive, this application “offers a very intuitive interface, similar to Mercado Pago, and you just have to choose the investment option and start playing. ”

Currently, the well distributes several prizes according to the currency with which “virtual lottery tickets” are acquired:

The latter, by not using the Ethereum network like the other options, has much lower commissions. In fact, gas (Ethereum fee) can be up to u $ s50 fee per transaction. Secondly, Argentina is in fifth place in number of users globally and tops the list among Spanish-speaking countries. 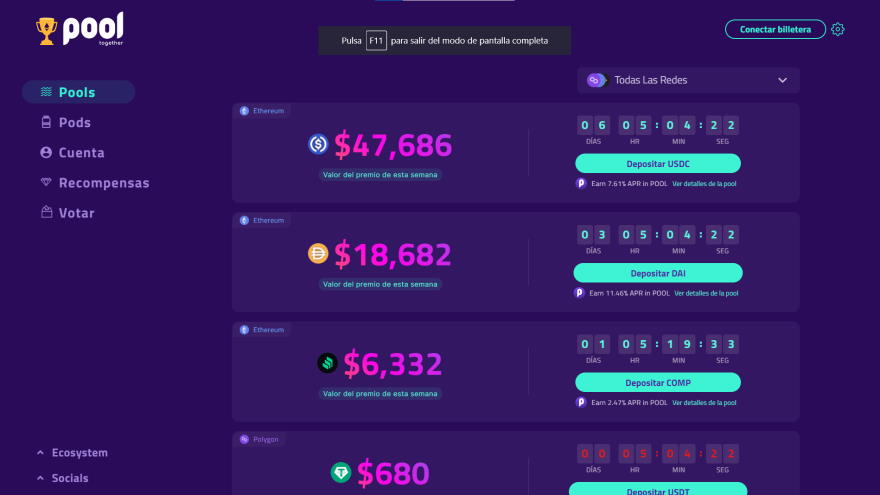 “Now you can enter to participate connected to Binance Smart Chain Y Polygon, in addition to Ethereum, doing the very low cost of interaction, just a few pennies on the dollar that are to pay the commission of the network, not PoolTogether, “says Burbach.


In addition, the executive highlights that “the mere fact of having the tickets allows you consistently earn passive rewards in POOL, the native token of the protocol, apart from having the possibility of winning each draw in which you are participating “.

That token, according to Burbach, will allow “migrate protocol control from the developer team to a Decentralized Autonomous Organization (DAO), which means that the decision making is now given by voting consensus in which all POOL holders can participate “.

“In this way, anyone with a minimum amount of POOL can create proposals to improve PoolTogether. In addition, there is the possibility of delegate these votes to people who are working more actively in the protocol, “adds Burbach, who is part of that DAO and one of the delegates with the most votes.

Likewise, Burbach assures that “the local market is growing at an exponential rate“and reveals that there is another way to participate increasing the chances of winning the pot.

“You can buy 100 tickets and participate for the jackpot. But also you can join other people with the same intentions and if the group wins the prize, it is distributed proportionally among the members, “he explains.

With respect to interest generated by all funds, the protocol performs what is known in traditional finance as “financial appeceament“.

“It allows people to borrow DAI leaving Ethereum as collateral or collateral, because they believe it will go up in value and they don’t want to sell it. Thus, They ask for $ 100 (DAI) and leave $ 125 in Ethereum. When they want to get their Ethereum back, they return the 100 DAI plus an interest. ”

On the other hand, Burbach indicates that “the version 4 from PoolTogheter (V4), which comes with many improvements related to gamification and versatility of the protocol “

Digital currencies such as Bitcoin, DAI or Ether are based on the blockchain or blockchain, a unique and inviolable registry of all transactions made on the platform (see image). 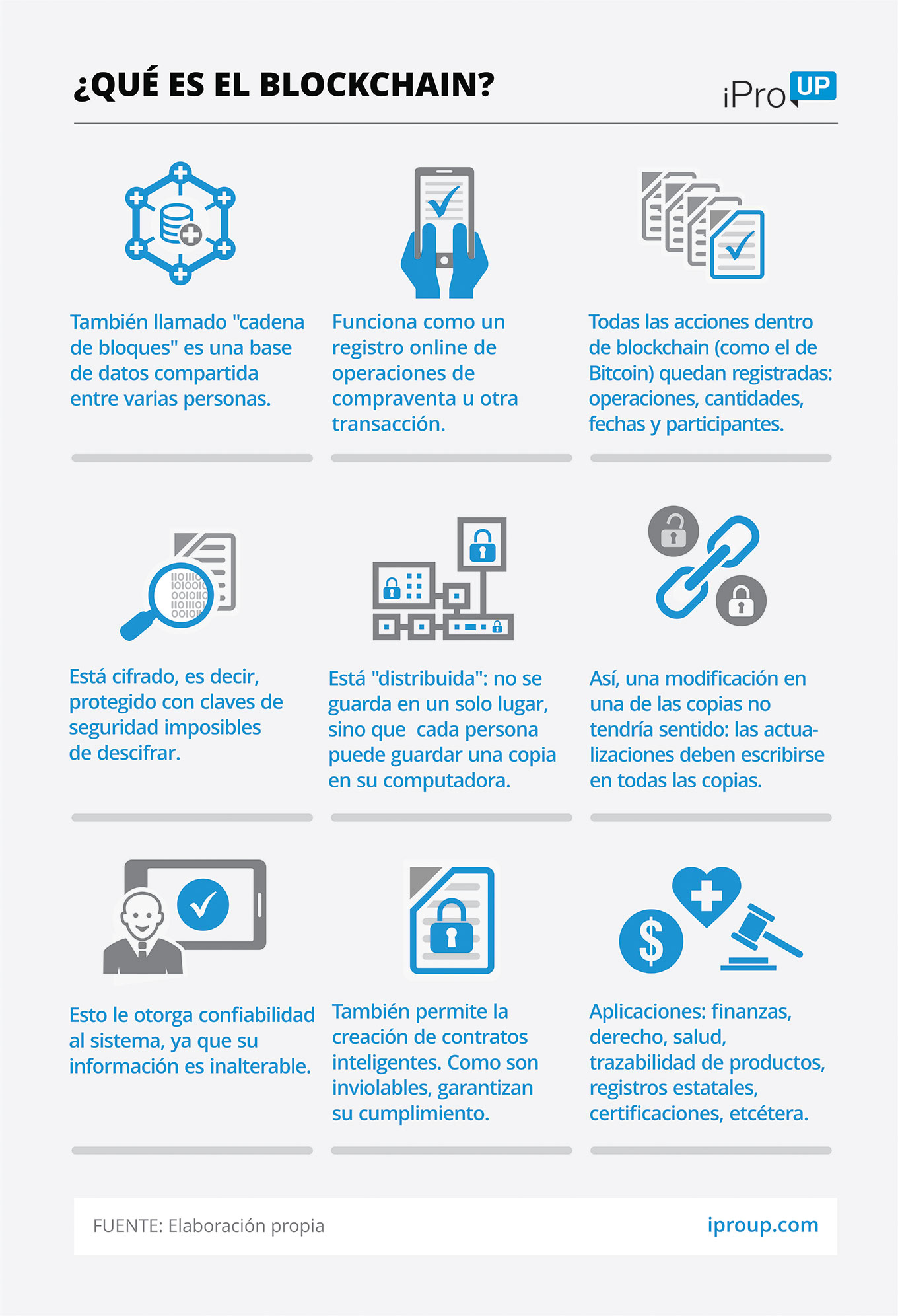 This database not only is encrypted by a powerful algorithm, but there is also a copy on the computer of each of the users that they download the official wallet. To operate, each has two keys, consisting of two long character strings made up of random letters, numbers and symbols:

– A public: used as ID, as if it were the account number, to know from and where the funds are going

“These two data must keep in a safe place, since there is no possibility of recovering them as can happen with the username and password of other online services “, warn the experts of the sector.

While using the Bitcoin wallet is the safest way to operate, it is also the most difficult to get started. Because of that there are fintech that offer the system of “custody”: create their own keys for each user and allow them operate in the style of Mercado Pago or a home banking.

One of them is SatoshiTango. Its CEO, Matías Bari, explains to iProUP that this application allows the user to:

The company ensures that during the quarantine increased the volume of transactions in digital currencies by 500% and that demand continues to grow unstoppably. In fact, the firm has just launched its own Bitcoin-based financial leverage system.

“Actually, you do not buy and sell because you cannot take the coins, but you have a position. You are ‘standing’ in a crypto. For example, if you think the price of Bitcoin is going to rise, you put in $ 10, we loan you $ 40 and you buy $ 50 in virtual currencies“, explains Bari.

Thus, continues the manager, “if the price goes up, then you liquidate your position, you return the u $ s40 and you take the profit, What is it much more than if you had only bought the u $ s10“.

Bari remarks that this service is growing progressively among the Argentines who test the alternative by betting between $ 50 and $ 100 in order to take advantage of the fluctuations of Bitcoin in a more “safe” way.

In this way, Argentines manage so that their savings maintain the maximum possible value and have anti-crisis “insurance”. The fluctuation of Bitcoin does not scare them so much anymore: they are trained with the seesaws of the local economy.