The ‘whales’ of bitcoin, aside from sales with a volume of just 4,000 million

This Monday’s sales in the cryptocurrency market, which have ended up bringing bitcoin to $ 42,600, lows since the beginning of June, have been mainly due to a movement between profit taking and panic of medium and small investors. Many operators have taken the opportunity to make cash, after the weekend the price of bitcoin soared to $ 49,000 and the corrections have been amplified by the global panic in the financial markets due to the situation of China Evergrande Group, the real estate colossus. which is on the verge of bankruptcy with what this implies for the Chinese economy. But the big bitcoin accounts, the ‘whales’, have been left out. Despite everything, the total capitalization has fallen to 1.87 trillion dollars.

“It seems that the big traders do not follow this bearish movement much”, explain the Belobaba Fund analysts. “Unlike the previous bullish momentum in which they put a lot of meat on the grill, as can be seen in the graph -below-, when whale movements reached 300,000 million dollars in a few hours,” they compare in a comment exclusively for Bolsamanía. “This Monday, on the other hand, the movement of the market decline it has barely moved 4,000 million dollars in this investor profile “, they comment.


Does this mean that the falls are going to slow down and we are going to see a recovery? “We cannot know it, what we do have is a clear difference in sentiment in the face of two diametrically opposite situations,” argue from the fund specialized in cryptocurrencies and tokens DeFI.

One of them, “a strong upward momentum that led bitcoin to accumulate capital gains of approximately 10%, driven at all times by the large operators”, and the other “with a fall of the same dimension without the whales having moved token, for now “, elaborate the analysts of Belobaba Fund

“We will see what happens in this important support area and if the whales end up appearing to accumulate at these levels. The next few hours can very clearly mark the evolution of the crypto market in the short term,” they sentence. 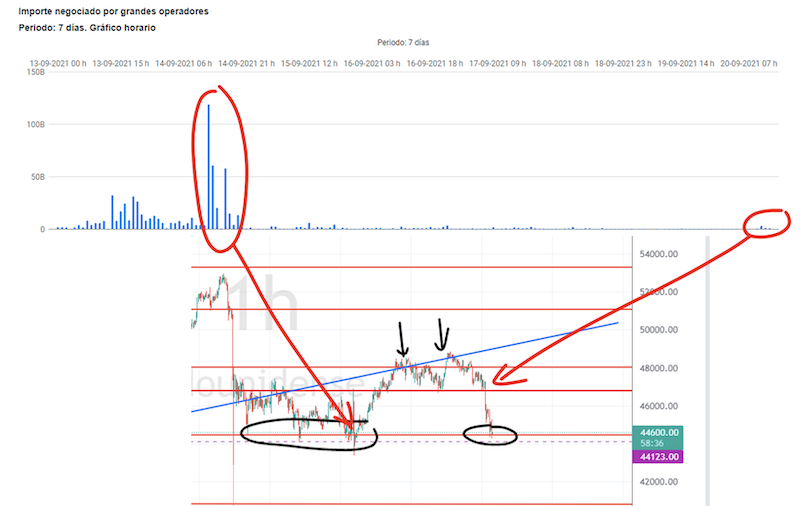